Today I spent a little time building the top of the center white section; I wanted to determine what slope pieces to use for the top. I think what I have so far works well enough, I’ll see for sure once I build the second half of that section (the part that supports the bridge). Here is a quick pic of the work in progress: 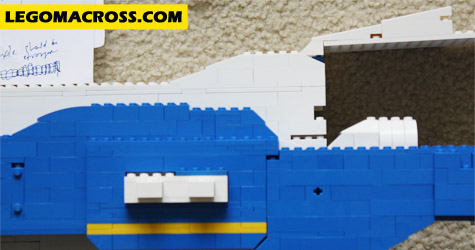 Added the angled top section to the white center section.

Now this is the least fun part about the build, THE LEGS. I feel like this where 99 out of 100 people stop when they try to build the SDF-1, these legs are no fun. The numerous long angles on the legs make it extremely difficult to replicate via LEGO. There may be a way to do it perfectly, I’m not claiming to be a LEGO master builder by any means, but I have not come across the pieces that would make building these angles easy. The center white section on the top of the legs, the center white section on the bottom and the outer blue sections on the top and bottom are all long and difficult angles to reproduce: 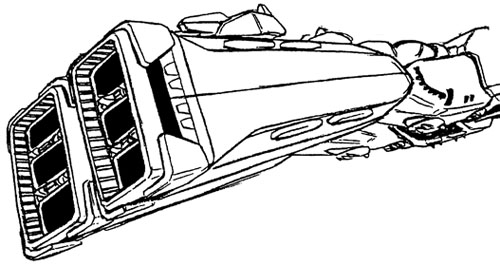 I wish to build the outer blue section to be 1 stud across. The longest LEGO blue brick slope that is one stud across is 4 studs long. I can find longer curved blue brick pieces that are 1 stud across but these leg angles call for sloped pieces, not curved pieces. Then I thought about using wedge plates for this section but again LEGO does not produce the longer wedge plates in blue, so no luck there. Just to satisfy my curiosity I even tested the theoretical building technique with white wedge plates to see if it would work and the answer was no anyways, the angles of the wedge plates did not work.

The center white section of the SDF-1 legs is just as difficult, same angle problems. In the past when I have built LEGO SDF-1s I have used plates and hinged plates to create the angled white center section: I would attach a white plate to white hinged plates at the bottom and at the top of the leg. The method works ‘ok’ but it is always difficult to line up the hinges and plates – it never fits exactly. It also makes any storage within the leg difficult to access because the hinge and plate assembly are not easy to seperate. Below is a pic of my first attempt at the building the leg with the hinge and plate method. 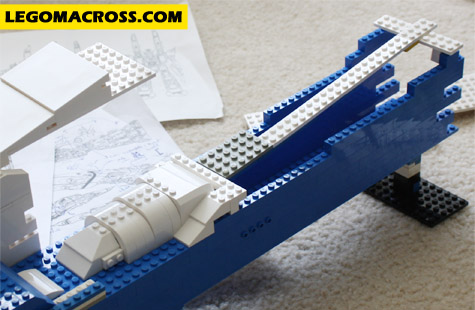 Trying the build the white center section with hinged plates. The hinged plate is at the bottom of the leg with all of the white slopes.

After considerable frustration with the angles already, I did not want to settle for the status quo of the plates and hinges for the white section of the legs. After all of the time, effort and money spent of this model I felt such a poor and recycled technique was not acceptable. However, what else could I use? Wedged plates would work because the angles were too severe. Early in the day I tried a crazy wedge plate, modified headlight and plate combination – that didn’t work. Angled slopes would work because although LEGO makes longer sloped bricks in white they do not make them one stud across. I was running out of ideas.

My current solution is to use hinged bricks, it looks OK to me now, but it presents additional problems such as weight. Also, with the hinge I’m only able to attach the white section to the top of the legs. To be truthful, the hinged bricks isn’t that much different from the hinged plates – so maybe that is still the optimal solution.

Building the white center section with hinged bricks. Also notice the studs on the side and the wedge plates of the carpet, those were from testing the wedge plate building technique for the side.

I have spent all day of this leg, and I still have a long, long way to go, but at least it is started. I hope I can turn this into something respectable, I don’t want the legs to ruin the build and my goal to create a faithful LEGO SDF-1! 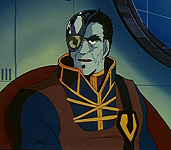 What a disorderly arrangement! This guy is completely ignorant of LEGO building tactics!