It is really, really, really hard to find time to spend finishing my LEGO SDF-1. Fortunately I am an entrepreneur and I love it, but unfortunately it leaves me very little free time, even on weekends! I took a break this Saturday and my wife was out of the house all day visiting friends leaving me alone with my favorite LEGO project. I didn’t get that much accomplished today, but still it was fun. Here is a snapshot of the bottom of the legs. I think I’m going to switch out the boosters though:

To give you an idea of the weight of the ship so far, just one hallow leg alone is 3 lbs. I don’t want to guess what the weight of the entire ship is now, but please know it is heavy! Because of the weight, I’m using six 1×1 plates (you can see on the far right) as pegs for the ship to stand on when either standing upright in crusier mode or after transformation. I would rather the 1×1 plates get scratched up over time on surfaces than the entire bottom of the legs. END_OF_DOCUMENT_TOKEN_TO_BE_REPLACED

Yesterday I was able to construct the arms (not the carriers) of the SDF-1. Fortunately I had about 90% of the white pieces I needed. I plan on using a Technic brick assembly to connect the carriers to the ship and to hold the carriers horizontally after transformation. This assembly is a huge challenge because it has to handle a lot of weight post transformation; only testing will tell if my design theory will work. I foresee post transformation the arms and carriers will be another section of the ship that will require glue to provide extra strength to manage the weight and stress.

There is not really anything extremely complex about my arm design, just turntables to rotate the arms out and wedge plates to get the angle effect. The rest is just white bricks, tiles and plates. The photos below best show the functionality:

Note the arm above is still under construction.

My apologies that this is not the most up to date image of the arms. The image above is of END_OF_DOCUMENT_TOKEN_TO_BE_REPLACED

I’ve only had a limited amount of time to work on building the SDF-1 due to my real life responsibilities, and unfortunately extra time will only become more and more limited going forward. Since the last time I posted I’ve been dealing with a number of weight issues – even beyond the legs. With the size and weight of this model, the traditional LEGO connections aren’t doing the trick.

In cruiser mode, the blue sections on the left and right side shown in the picture below were not being held tightly connected to the main white center section with just a couple of technique pin assemblies. This was especially troubling since this was happening before I attached the legs and before I have even built and attached the carriers – which would add even more weight. I tried to remedy the situation with numerous additional pin and axle connections which all improved the quality of the connection between the white and blue sections but none were able to make the connections really ‘tight.’ The best solution was to build a 1×1 hole on both sides of the white center section which I was able to line up with the top of the blue sections. Through this hole I slid a plate that I was able to use to connect the sections and create a tight connection. 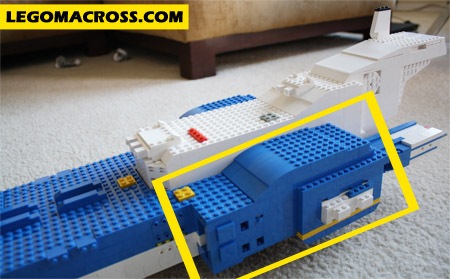 I’ve also rebuilt a significant portion of the leg to improve it and have started building the second leg. I’ve have come to the realization that glue is the only solution to make the model strong enough to support the legs. I’ll most likely need some form of super glue, because the legs are extremely heavy and there is not LEGO trick I can think of that I can use to connect he legs to the ship AND still have the SDF-1 be able to transform.

Before I begin to start to glue the leg I wanted to make sure the SDF-1 didn’t have some form of fundamental design flaw that would not allow the SDF-1 to stand and support its own weight after transformation. So I built a skeleton of the second leg to test the balance during transformation and fortunately it worked:

Knowing that it could support the weight I went on ahead and also tested the transformation:

I was most afraid that the SDF-1 would tip backwards because of the weight of the Main Guns, but fortunately no issues.

The only issue I found with this test was with the technique I’m using to attach the Main Guns is not really holding the guns upright and tightly to the ship. I may have to go back to the drawing board on that feature.

I have to order a ton of new bricks on Bricklink in order to finish the 2nd leg. If the gluing the LEGOs together does not work in providing enough support for the legs then I’m not sure if I’ll be able to continue the model, at least not at this large size. I’m going to hope that all the time, energy and money I put into this model will not go to waste because of that.

Sorry I have been away for so long – please don’t think I have abandoned my LEGO SDF-1! Things have been extremely busy and unfortunately I won’t have as much time to dedicate to this project going forward as did last month. I have been able to sneak in some time to build here and there; most importantly I have started building the second half of the ship. I’m still short of a lot of pieces, but I did receive a couple of my orders from Bricklink which allowed me to put some finishing touches (although far from complete) on the main center section. Below are a couple of snapshots of the progress to date: 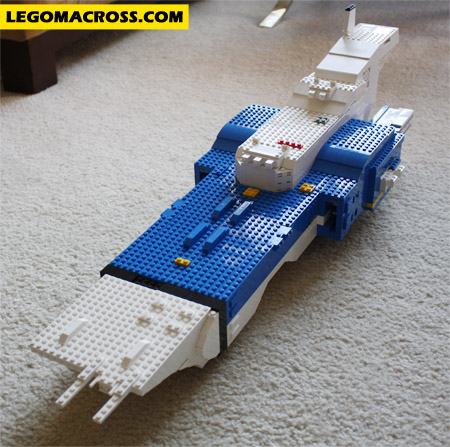 Starting the build of the left side. Part of me feels the blue section of the Main Guns may be too short, but I'll hold off on judging until I see the ship with the both Legs attached. Besides, the last thing I want to do at this point is reconstruct anything!

Although the Main Guns may look almost complete, there is still a lot of work to be done. There are some areas I will have to take apart and rebuild. 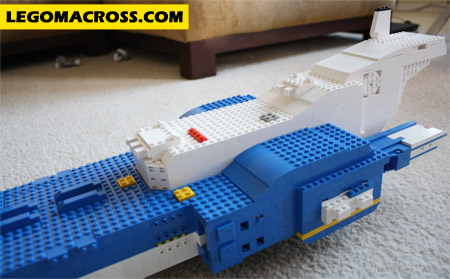 As I described in my previous post, there are still major issues with the weight of the leg. I have to decide if glue is the only solution to make the LEGOs strong enough to support the weight horizontally. If glue is the only solution, I have to decide when is the right time to start gluing Sections together, I don’t want to glue Sections together too soon and have to go through the trouble of taking the pieces apart.

To prove my point about not wanting to glue too soon, I have already discovered that I need to rebuild a section of the leg to make it so it can support the ship after transformation. Recently I found a critical design flaw in one of the connection points I built for transformation and as is I don’t think it would be able to support the ship upright.

There is still a great deal of work to be done, I’ll have to attack the leg issues when I have a significant amount of free time to focus just on solving the leg’s issues. For now I am going to wait for my last Bricklink order to arrive. 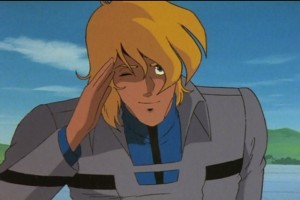 I have been able to complete most of the leg; however my worst fear has come true. It appears that the weight of the leg has compromised its connection to the rest of the ship. To put it simply when I move the ship the weight of leg forces the connection points to break apart and the leg breaks away from the ship.

This connection point does not support the leg horizontally. Note the white brick on the right, even that extra support does not keep it from falling apart.

To attempt to remedy I reconstructed all of the connection points, including adding an axle connection and a male/female pin assembly as well as reconstructed an internal beam that extended from Section 3 into Section 4 (the legs). Although my improvements improved the strength of the connections I could not overcome the physics of the situation. The current weight of the leg is 2 ¼ lbs, and I think no LEGO Technic pin and/or axle assembly can hold that much weight up horizontally. Also, the leg is currently hollow and will only become heavier as I add more detail to the SDF-1. 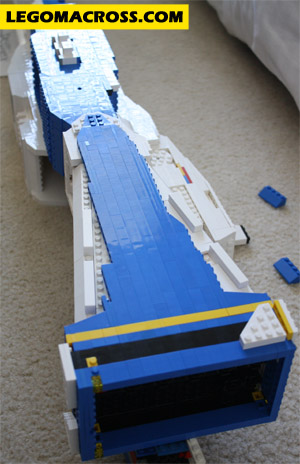 I wanted to avoid using glue in building this model, but I think that at this point the physics of the SDF-1 make it unavoidable. The legs are a 1/3 the length of the ship, the heaviest section of the ship and protrude out with no support – with a model of this size extra support seems unavoidable. I know I could do some alterations to attempt to cut the weight of the legs, but I don’t think I could do any drastic changes that would cut the weight by a third or a fourth. Plus, after transformation the legs support the entire ship so they still must remain sturdy. I’m hoping that if I glue the connection points together it will give it enough strength to horizontally support 2-3 lbs.

If glue is the solution, I feel it is still premature in the build to be glueing LEGOs together; I’m not sure what might still change. Yet, if I don’t try to strengthen the connection with glue now I won’t know if it will work and I won’t be able to handle the ship easily. It’s a dilemma. In the meantime I going to do my best to think of other possible solutions to resolve this without glue, but as I alluded to earlier I think the chances of a strictly LEGO solution is slim to none. 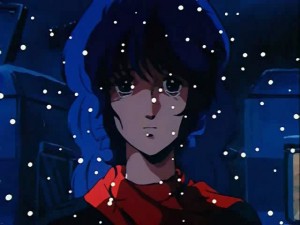 "I know it hurts, I feel your pain too. But don't give up now...you are so close to building the perfect LEGO SDF-1!"