I finally started building the carriers, starting first with the Deadalus. I’ll admit I’ve been putting these off for a while for a number of reasons:

The only way to answer these problems is to begin the build and get to testing. I started with the Daedalus because it is the least complicated of the two, the Prometheus has a lot of angles on its surface and beyond. However, since with this LEGO SDF-1 model I want to capture as many details as possible it still makes the Daedalus, the ‘simpler’ of the two, a very complex build.

I used to think of this carrier as a simple square box but with further inspection there are a number of challenges. The white tip will be hard to duplicate in LEGO, the ship has a number of openings on each side, the curves of the red bottom and on the top there are a number of indentations and slopes as well as two sections that rise over the ship and connect on both sides. I’m no master builder so to me these details are very challenging.

If you look at it long enough all of the details begin to pour out, this is a complex ship.

I had started building this ship some time ago, I had the skeleton shell sitting around wrapped in plastic for at least six months. A lot of it I have chosen to keep, but at the same time I’ve already taken apart and replaced about a fourth of it just with today’s build. When I get some more pieces I’ll probably reconstruct and replace even more. Here is a photo of the work in progress: 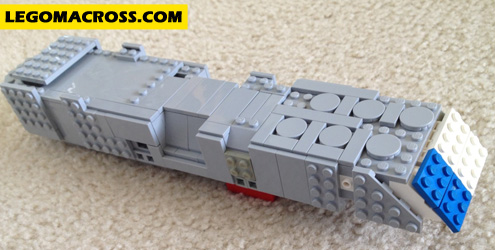 Still a loooooong way to go before completion.

Now I’m pretty much at a standstill, I’m completely out of the necessary gray pieces. In fact, I don’t even know what color gray the pieces that I’m currently using for this build are! Unfortunately I purged many of my Bricklink orders from my email so I can’t even look past orders up to verify if they are light gray or light bluish gray. I think they are the later so I added a few pieces to my latest Bricklink order to confirm.

I also added some dark blue tile pieces for the carrier’s top surface. I’ve downloaded a few Daedalus images to confirm the color scheme and it looks to me like the tops of both carriers is a dark blue. I’m going to try that out to see how it looks. Tthis is the shortcoming of not having a physical model in hand to look at – those dark blue tiles are quite expensive so if I’m off I will have wasted a lot of money. Hopefully my Bricklink orders will arrive by the end of week so that I can get back to building next weekend.

This image appears to have a blue top. 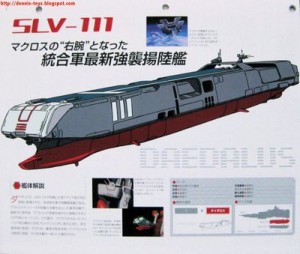 Another Daedalus image with a blue top. 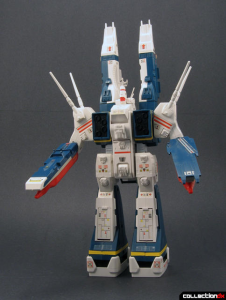 Image credit to Collectiondx. This toy SDF-1 also has the carriers with dark blue top surfaces.