I spent most of the day building the Daedalus and just as I said last week it continues to be quite challenging. I received two Bricklink orders on Friday and my wife has been gone all day which allowed me some time to get into some serious building. My goals for the day were:

I didn’t order any gray pieces last week because I was unsure of what the shade of gray to buy. My latest orders confirmed it was ‘light bluish gray,’ so I’ll add a bunch more light bluish gray inverted slopes, plates and bricks to my next Bricklink order so I can make some progress on the gray portions of the ship.

The photo above is my third rough draft of my LEGO Daedalus, as you can see I’m beginning to fill in the blue top. Of course I’m still short a number of tile pieces but I feel the color scheme does reflect more accurately the colors of the Daedalus. I’ve also switched the hinges on the white front end; I’ve attached the hinges to the deck of the ship. I studied the Daedalus images a lot more since my last post and I realized the white front section opens up at about a 45 degree angle and the only way to achieve that feature is to place the hinges on the top.

Here are a couple of more photos after a full day of building, consider this the ‘“forth rough draft” of the Daedalus: 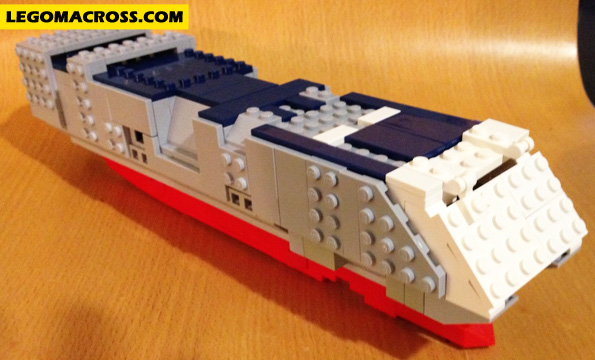 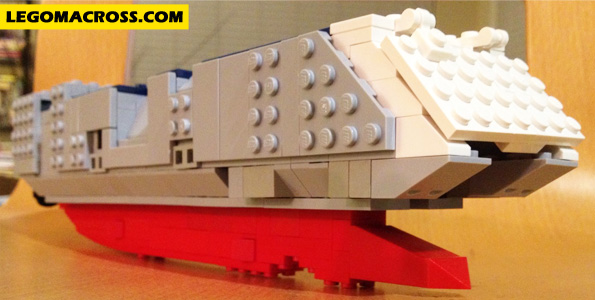 A number of the changes are in the interior of the ship, not visible in the photos. It took me quite a long time (re)build (over and over again) the lower red section and even longer to figure out how to attached it to the carrier. The red section is 2 studs across and the bottom of the gray section is 5 studs across so centering it was quite tricky – I took a lot of trial and error for me to get my the right technique. The red section in the photo below still is not complete, but at least I have a general outline of the desired shape.

So far the weight of my LEGO Daedalus is .75 lbs, I’m hoping it won’t exceed more than 1 lb when I’m finished.

When I get my next order from Bricklink I’ll try to finish the bottom of the gray section, the carrier’s top and the bottom red section. I use the word ‘finish’ loosely because no matter what I most likely won’t have all the pieces I’ll need or I’ll update my techniques to reflect some overlooked detail which would result in another Bricklink order. Hopefully I’ll have time to build next weekend too.

LEGO Daedalus? Whatever, Miriya Not Impressed.